“You always have to be the wise guy, eh?  I am going to start calling you Jake…..the village idiot.”

A blue net hat from a trip to Hawaii somehow made its way from the bottom of the hat drawer and into the living room and I saw it and had the same thought that most anyone would – “I can use that hat to make a kick ass 70s runner costume and run up Mount Santias this Thursday morning!”  Throwback Thursday was born!  Well, my two small kids screwed up my Thursday run so it was pushed back to Friday and so Throwback Thursday died as quickly as it began and Fun Run Friday was born!

And so it began shortly before 6 AM on June 8th 2012 at the base of Mt. Sanitas.  A man in a net hat and jean shorts set out to change the world….that man’s name was me.  My idea was to run up in that outfit every Friday.  I would be like a ghost emerging from the morning mist on Friday and then disappearing as quickly as I came.  I’d be elusive.  Some would doubt my existence.  Others would speak in taverns (in whispered voices only) of their encounters with me.  It would be magical.  Spiritual.  But that first run taught me something.  It taught me that jean shorts chafe.

With that, I knew the strategic vision of this operation needed to change.  Any summit wearing or carrying anything ridiculous was fair game and the more ridiculous the better.  Thus began a weekly ritual of spending Thursday nights running around the house pulling out old clothes and props to assemble something I could run to the top of Sanitas with. I have two rules.  Rule 1 is to wear proper footwear.  I just couldn’t live with myself if I broke an ankle because I tripped in Wonder Woman boots.  Rule 2 is to not be offensive.  I don’t mind if someone thinks running up and carrying a wooden patio chair is a stupid idea (mainly because it’s absolutely a stupid idea), but if people start getting pissed off then it’s just not worth the wigs and morning make up.

Over the weeks I have come to know many familiar faces on the mountain…many of them with horrible fun run ideas such as (keep in mind these ideas were at the height of our very hot summer) Eskimo, snowboarder, scuba diver  and  lumberjack with working chainsaw…..  I suppose when you are at the top of the mountain talking with a guy who just ran up with a tray of drinks and lots of flair, no idea seems off limits. Nevertheless, seeing a good number of people truly get a kick out of it makes me think “yes, it was worth all that time in the basement looking for the George Mikan protective eye glasses in order to pull this costume off” and “that hour with the table saw to make that banner instead of helping my wife with dinner was worth it.”

I’ve learned a lot these last few months running the 1500 vertical feet from my house up to the top of Mount Sanitas with prop or costume every Friday morning.  I’ve learned carrying a wooden patio chair isn’t as hard as it might seem, while being dressed as Atlas and carrying a giant globe is very hard.  Unless they see it in the commercial, most people just think a Snuggie is a long funning looking robe.  Too many people in Boulder can watch a guy run by them in a tie with a briefcase and coffee and not smile.  Dribbling a basketball along a rocky ridgeline trail is a risky endeavor.  If you are carrying some swim noodles and you ask someone if the pool is still at the top, too many will genuinely think you are looking for a pool at the top.  Moses did not carry a Fed Ex package and a volleyball with a red handprint on it, Tom Hanks in the movie Castaway did.  Good friends will run with you, but those who run with you in costume are just as stupid as you.  Treasure them.  Even Jake the village idiot needs friends.

No 70s throwback run is complete without some burns and a stache. 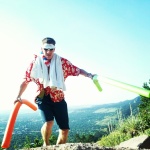 I heard there was a pool up top! Turns out they said “pole”. Bummer. Hawaiian shirt, zinc noseblock, bathing suit, visor, shades and of course two swim noodles. 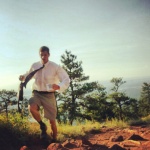 You want to be a professional runner? Put on a tie and act like one! 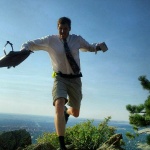 My job requires some air travel.

Tube socks, safety goggles, belt, wristbands, headbands, slicked hair and even a towel! This was a pretty serious summit! 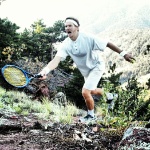 That ball was on the line!

Side note: Yeah, I still got a little tennis game.

People asked my why I carried a chair up? So I have a nice place to sit at the top, of course!

Best Seat In The House. Everybody else was sitting on rocks, but I had this comfy chair. It’s too much work to try to find and sit on a good rock. 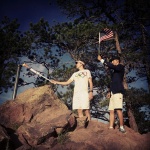 The openiing ceramonies of the Olympics were that night. There was not a dry eye on the mountain top as Billy and I celebrated in our own way. Citius, Altius, Fortius. 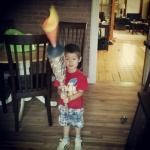 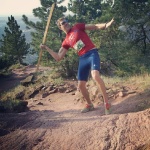 In Boulder fashion, I made that “javelin” from recycled wood. 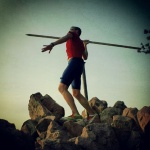 At the Summit. All hail, Lord Michael. 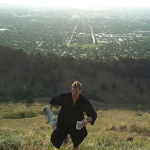 I was running late but wanted to summit…also wanted to read the paper, have my coffee and lounge in my robe. What to do? Answer…them all! 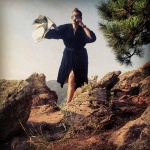 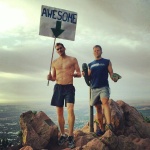 It’s not a costume run, it’s a fun run and this time I was having fun just letting the world know a little about myself. Glover joined with two large zucchinis which turned into one large zucchini and two zucchini halves after a fall.

I am pretty sure I was VERY passionate about my cause. If I can remember what it was, I vow to force lasting change on this unknown issue that very likely affects many people or possibly animals and maybe even the environment. 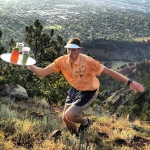 Hardest training waiter in the game.

Behind the scenes the night before. Applying putty to the bottom of my glasses so they don’t fall off. I’m actually using a pizza tray and “flair” I got when I worked at the Outback in college.

I’ve always felt like I walked around with the weight of the world on my shoulders, this day I tried running with it. Side note: You’d be surprised how many Boulderites think Hercules carried the earth. “Hey! It’s Hercules!” 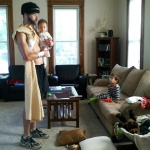 Post run. The softer side of Atlas. By this point my kids are used to the costume. When I came home Maxon saw the sheet and the globe I was carrying and asked “did you go running?”

Perhaps the fastest summit ever of Sanitas in a Snuggie.

Enjoying a book and a laugh snuggie style at the summit.

I played the intro song on a loop 48 times during my summit and back. It’s still playing in my head. I love it.

Behind the scenes for some prop assembly. I made the frame from scrap wood, tacked poster board to it, taped the people photos on it, used black construction paper to create the “frame” between the people (and then black face paint when I ran out of paper) while managing to avoid injuring my son who is playing Super Why. If I tried this hard in the rest of my life I would probably be pretty successful.

It was cold, snowy and dark. A ranger stopped me and asked what I was doing running around like this at 6 AM in the dark (the sun hadn’t come up yet) and I told him I just liked doing crazy runs. He paused and said, “I’m a ranger so I have to ask you this….’ARE you crazy?'”.

In all seriousness, running through town to the trail head dressed like this while it was still dark out was not smart. Got some concerned looks from homeowners and drivers. 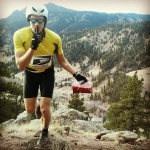 Shaved several minutes off my PR to the summit. But let’s keep this pic between us ok? Or I’ll kill you. Ha! LOL…..seriously, I’ll kill you…..then I’ll sue you.

A group of us carried this tree up for Christmas.

Here is our crew atop Sanitas with the tree, decorations, coffee and music we ran up with. 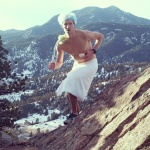 Got the order of my morning activities screwed up and got ready to shower, then went to run and then realized that was the probably not the right order.

Error: Twitter did not respond. Please wait a few minutes and refresh this page.